At its core, sleep apnea is the interruption of normal breathing during sleep. The two primary forms of sleep apnea are obstructive sleep apnea (OSA) and central sleep apnea. OSA is caused by repeated physical obstruction of the upper airway that either partially impedes or completely blocks proper airflow (figure 1). It is the most common form of sleep apnea and is the focus of this article.

OSA is a relatively common condition. The American Academy of Sleep Medicine estimates that approximately 30 million adults in the United States suffer from this disorder. It is known to be two to three times more common in men. In addition to gender, other risk factors for OSA include advanced age, obesity, and physical and/or anatomic abnormalities of the skull, face, neck and/ or throat. Certain medical conditions may also predispose one to OSA including congestive heart failure, end-stage kidney disease, chronic lung disease and low thyroid hormone levels. In the United States, OSA is more common among African-Americans, Hispanics and Native Americans. Often, patients also have family members who suffer from OSA, suggestive of a possible hereditary component. 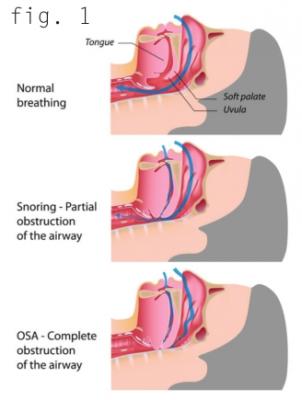 Snoring is a common symptom of OSA; however, not all people who snore have OSA. Daytime fatigue is another common finding in people with this sleep disorder, but, as with snoring, it is a relatively nonspecific finding, given the fact that many other disorders may also result in daytime fatigue. Commonly, the spouse of a potential OSA sufferer can offer helpful clues to the clinician. Observed nocturnal gasping or choking during sleep is more specific for true OSA, and a history of this usually dictates further evaluation. Other symptoms of OSA include early morning headaches, frequent body movements that disrupt sleep, nonrestorative sleep, frequent nighttime urination, depression, irritability, cognitive dysfunction and sexual dysfunction. OSA sufferers are also at higher risk for motor vehicle accidents and job-related accidents.

If clinical suspicion of OSA remains after a thorough history and physical examination, patients are often referred for a sleep study. Several types of sleep studies are available.

The gold standard form is performed overnight in a sleep lab with a technician present. Several parameters are monitored during this form of sleep study, including brain waves, heart rhythms, blood oxygen levels, chest and abdominal movements, incidents of snoring, nasal and oral airflow, body position and many others. In certain patients with seemingly uncomplicated OSA, a home sleep study may be appropriate and is often performed instead.

Effective OSA treatment is often multifaceted. The aim is to improve sleep quality and daytime function in addition to decreasing the risk of potential complications of sleep apnea. Lifestyle modifications generally play a role in OSA management. Such changes may include avoidance of alcohol and other sedating drugs. A healthy diet and regular exercise can help with weight loss, which, in turn, may help lessen the severity of OSA. Maintaining good sleep hygiene is also essential. This entails following a regular sleep schedule, resisting the urge to nap during the day, refraining from consumption of caffeine after lunchtime, avoiding light-emitting screens (e.g., televisions, phones, tablets) in bed, and making the bedroom conducive to sleep. OSA sufferers may also be prescribed a continuous positive airway pressure (CPAP) machine, typically considered as the first line treatment for OSA. CPAP works by maintaining a column of air pressure in the airway to keep it open during sleep. Other therapies that potentially benefit sufferers include oral appliances (designed to hold the jaw forward), upper airway surgery and stimulation of the nerve that powers the tongue. Usually, clinicians take an individualized approach to managing cases depending on several factors, including the severity of sleep apnea, ability to comply with or tolerate non-surgical measures, occupational duties and many other parameters.

The risk of leaving sleep apnea untreated may vary from vague cognitive problems to more immediately life-threatening complications such as an acute cardiac event. According to the American Sleep Association, more than 6% of people who suffer a fatal heart attack also have sleep apnea. It is also estimated that having sleep apnea increases the risk of developing high blood pressure by almost 50%. Figure 2 illustrates some of the other conditions that may result from sleep apnea.

In summary, OSA is a common condition that affects millions. Once diagnosed, it can often be treated effectively. Doing so may help the sufferer avoid several long-term complications, some of which may have a significant negative impact on the patient’s health.

Dr. Chuka Ifeanyi is an ear, nose & throat specialist at Highland Clinic in Shreveport, and now serving patients in Bossier City. Dr. Ifeanyi specializes in the diagnosis and treatment of disorders affecting the ear, nose, throat, and the head and neck of both children and adults. He is accepting new patients in both Shreveport and Bossier offices and can be reached at (318) 798-4440. Shreveport location: 1455 East Bert Kouns Industrial Loop, Suite 206 and now in Bossier at 2539 Viking Drive, Suite 103. Visit https://www.highlandclinic.com/staff/chuka-v-ifeanyi-m-d for more information.